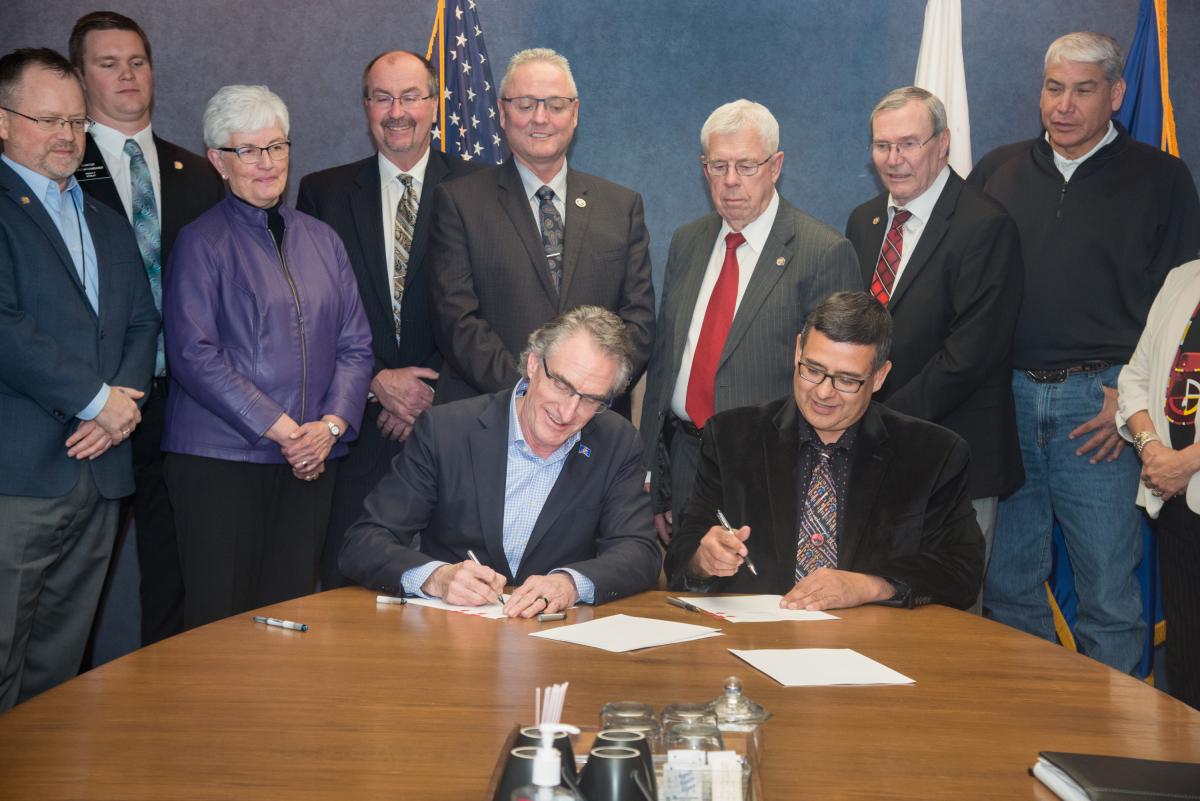 BISMARCK, N.D. – Gov. Doug Burgum and Mandan, Hidatsa and Arikara (MHA) Nation Chairman Mark Fox today signed a compact that maintains the current tax rate on oil and gas production and extraction within the Fort Berthold Reservation, while changing how the state and tribe share tax revenue from new oil and gas activity on trust and fee lands.

“This historic agreement lays the foundation for a stable tax and regulatory environment that will help North Dakota compete with other oil producing states while providing certainty to the tribes, the state and private industry,” Burgum said. “We thank Chairman Fox, the entire MHA Tribal Council and our North Dakota legislative leaders for their collaboration and partnership on this issue for the benefit of all North Dakotans.”

“The MHA Nation supports continued responsible energy development, and this compact will help us maximize that opportunity by providing certainty and stability to our members and those looking to invest in our lands and natural resources,” said Fox, chairman of the MHA Nation, also known as the Three Affiliated Tribes. “The additional tax revenue received through this compact will go a long way in helping us address infrastructure needs and other priorities for our people.” The MHA Tribal Business Council approved the compact on Feb. 25.

Under the compact, the current combined oil production and extraction tax rate will remain at 10 percent, with a “trigger” that increases the rate to 11 percent if the average price of crude oil exceeds $90 per barrel for three consecutive months.

The compact is contingent upon the passage of Senate Bill 2312, which was approved by the Senate and now awaits action in the House.

Rauschenberger has said the tax certainty created by the bill has the potential to spur increased drilling activity and oil tax revenues for the MHA Nation. The bill’s fiscal note estimates it would reduce oil and gas tax revenue collected by the state by $33.6 million, with a corresponding increase in revenue to the tribe. However, the tax commissioner’s office also estimates each new drilling rig would generate $16 million in increased tax revenue per biennium, which could offset the bill’s impact to state revenues.

Video of the compact signing will be posted on the governor’s Facebook page at https://www.facebook.com/GovernorDougBurgum/.